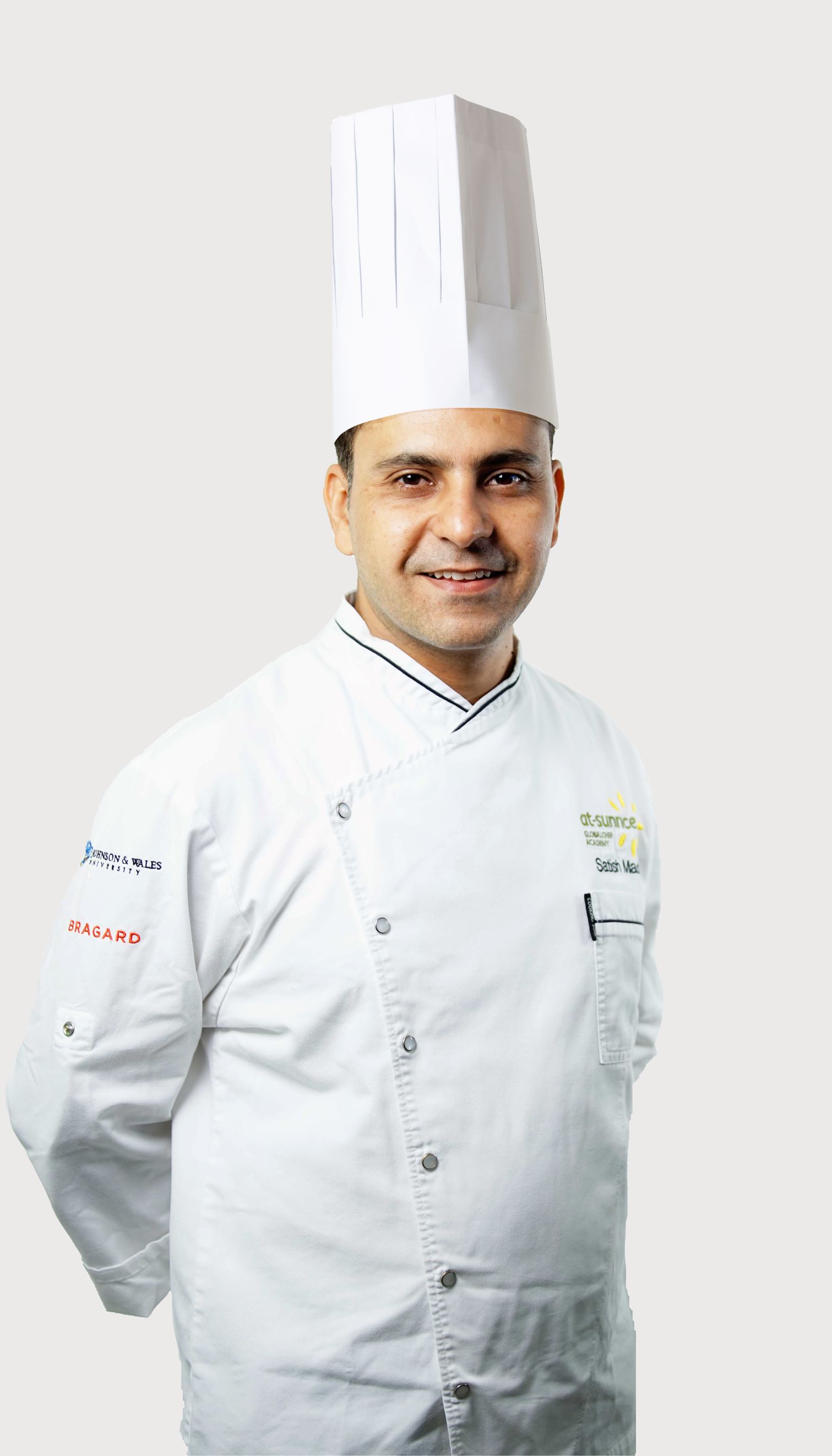 Chef Satish, has a vast of experience in the F&B industry. He possesses a wealth of culinary expertise and innovation under his sleeves. The chef not only holds a formal qualification in Hotel Management (a three years Diploma in Catering & Nutrition) but also a Bachelor’s degree in Commerce from Delhi University, India. He has worked with chefs from around the world and developed a distinctive style of Indian cooking that combines traditional flavours with a modern style of presentation. This rare combination of passion for culinary art and commercial mind were instrumental in creating a uniquely light and modern Indian menu for D’Bell. During his career, he has cooked for the Former President of Singapore Mr. S R Nathan and Former Deputy Prime Minister, Prof Jaya Kumar and various other dignitaries and celebrities. His passion and dedication towards his profession have won him three Gold Medals in Culinary Competition at Food Hotel Asia, Singapore (2008, 2012 and 2014). FHA Culinary Challenge (FCC) is the region’s one of the most prestigious international competition for the promotion of culinary excellence. He has also received a lot of appreciations and rewards in his professional career. He has worked with several 5-star luxury hotel chains like, The Oberoi Group and Unison Group (The Grand). He has been a part of the team at SATS; one of the most-admired companies in Singapore, for the quality of its services. He has also worked for The Singapore Island Country Club, a prestigious club in the city and Group Executive Chef while at FG Food Industry setting up the central kitchen for Indian cuisine, a chain restaurant in Singapore and also for wholesale supplies. Indian cuisine is chef Satish’s forte. He uses his knowledge and exposure to his most creative advantage. Indian food has a lot of variety and flavours and the chef prefers to use fresh ingredients and authentic cooking methods to get the best results. 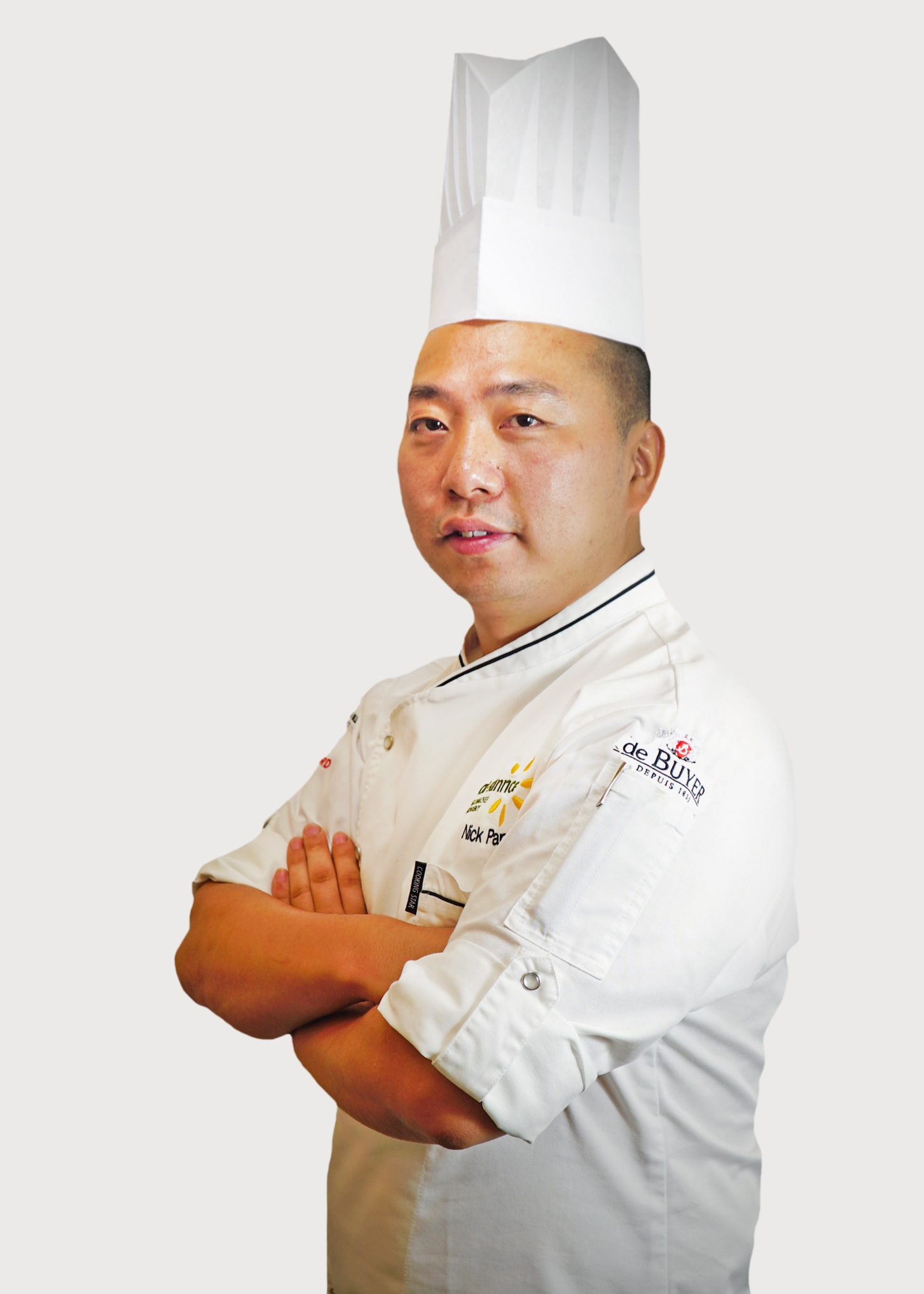 Chef Pan Hua Gang is born in China, cooks excellent North Eastern Cuisine and have worked in many hotels and restaurants before coming into At-Sunrice GlobalChef Academy. He has attained the Chef of Chinese Cuisine / Senior Skill Certificate and the WSQ-Higher Certificate in Culinary Arts for Chinese Cuisine.

He is a true artist on the plate, using various ingredients to create many vibrant and colourful dishes. He even participated in the 6th and 7th FHC Culinary Arts Competition, winning the gold medal in 2004 and both the silver and bronze medal in 2005. His attentiveness and patience in presenting his dishes have helped him to design some one of a kind culinary creations. 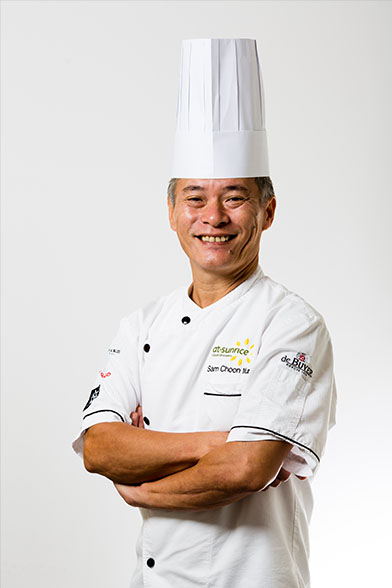 Chef Sam Choon Mun attained two diplomas in hotel management and food and beverage operations from the prestigious Hotel & Tourism School ‘Les Roches’ in Switzerland before deciding to focus on becoming a restaurant chef. He went on to obtain further formal culinary and pastry training in the Academy of Paris in France and to launch a career that took him through various restaurants and hotels in Paris, London and Singapore.

His most recent appointments were in Paris, as Chef-in-Charge at the Restaurant Gallopin and as 1st Chef de Partie at the three-Michelin-star Restaurant Alain Ducasse at the Hotel Plaza Athenee. He joined At-Sunrice in 2011 to share his experiences and knowledge on Western culinary arts with aspiring young chefs. Chef Sam also holds an Advanced Certificate in Training and Assessment from the Singapore Training and Development Association. 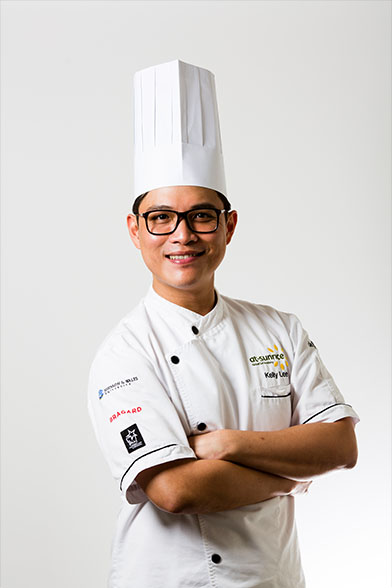 Chef Kelly Lee was a graduate of At-Sunrice GlobalChef Academy with a Diploma in Culinary Craft & Service Excellence. He served his apprenticeships as trainee cook at Iggy’s and SATS In-flight Catering. He has also worked as Junior Sous Chef at Absinthe (La Bella Epoque) Fine Dining, Chef de Partie at Caffe B and Junior Sous Chef at Brasserie Wolf.

In 2011, Chef Kelly steered his career towards culinary education by joining At-Sunrice as Assistant Chef Instructor with the Western culinary arts team. He holds an Advanced Certificate in Training and Assessment from the Singapore Training and Development Agency and a Diploma in Quality Assurance Engineering from Ngee Ann Polytechnic. 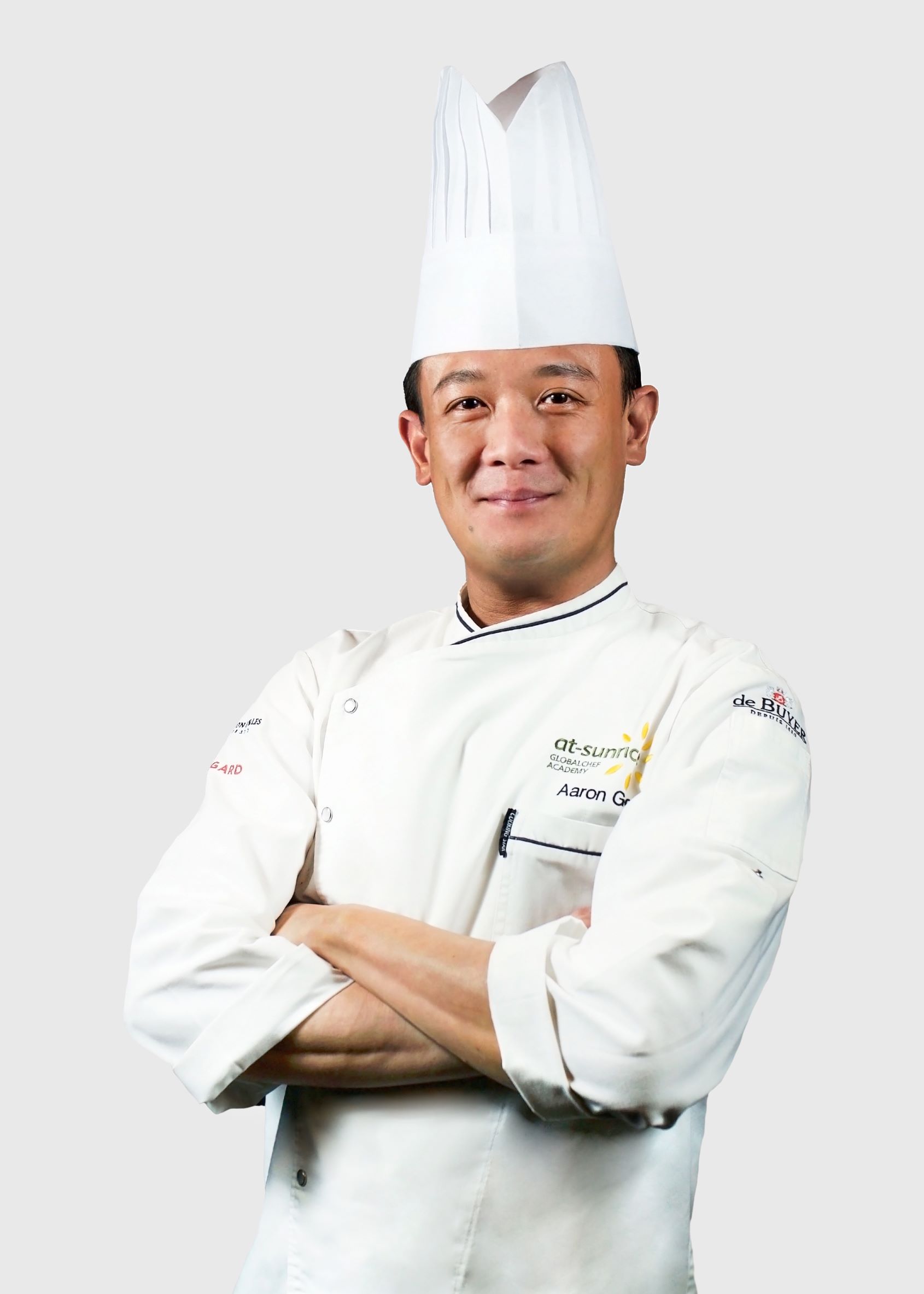 Chef Aaron Goh has close to 20 years of culinary experience from four 5-star hotels and a Michelin-starred restaurant. His most recent role was Junior Executive Chef in the Knolls, a Michelin highlights restaurant in 5-star hotel, Capella, Singapore. Prior to this, he was working as Chef De Patie for Chef Daniel Boulud at One Michelin-starred restaurant DB BistorModerne, New York. An alumnus of At-Sunrice GlobalChef Academy with a diploma in Advanced Culinary Arts, Chef Aaron has also worked in Ritz Carlton Milennia, Singapore in multiple kitchens such as the Banquet kitchen, Japanese Kitchen, Pastry Kitchen, and the Chocolate Room.

Chef Aaron was the first ever chef in Singapore to do a sabre dor gala dinner at Amara Sanctuary Sentosa, Singapore. He was also involved in the annual New World Food and Wine Festival Ritz Carlton, Singapore, and the WGS Awards for Excellence with veteran Australian Chef, Chef Mark Best.

Currently a development chef, Chef Aaron conducts research and development and is one of the chefs teaching Note-by-Note Cuisine, a style of cooking which replaces traditional ingredients such as meats and vegetables with their composite compounds. Chef Aaron aims to build a sustainable ecosystem built on principles that further the ecological, social and economic values of a community and region. 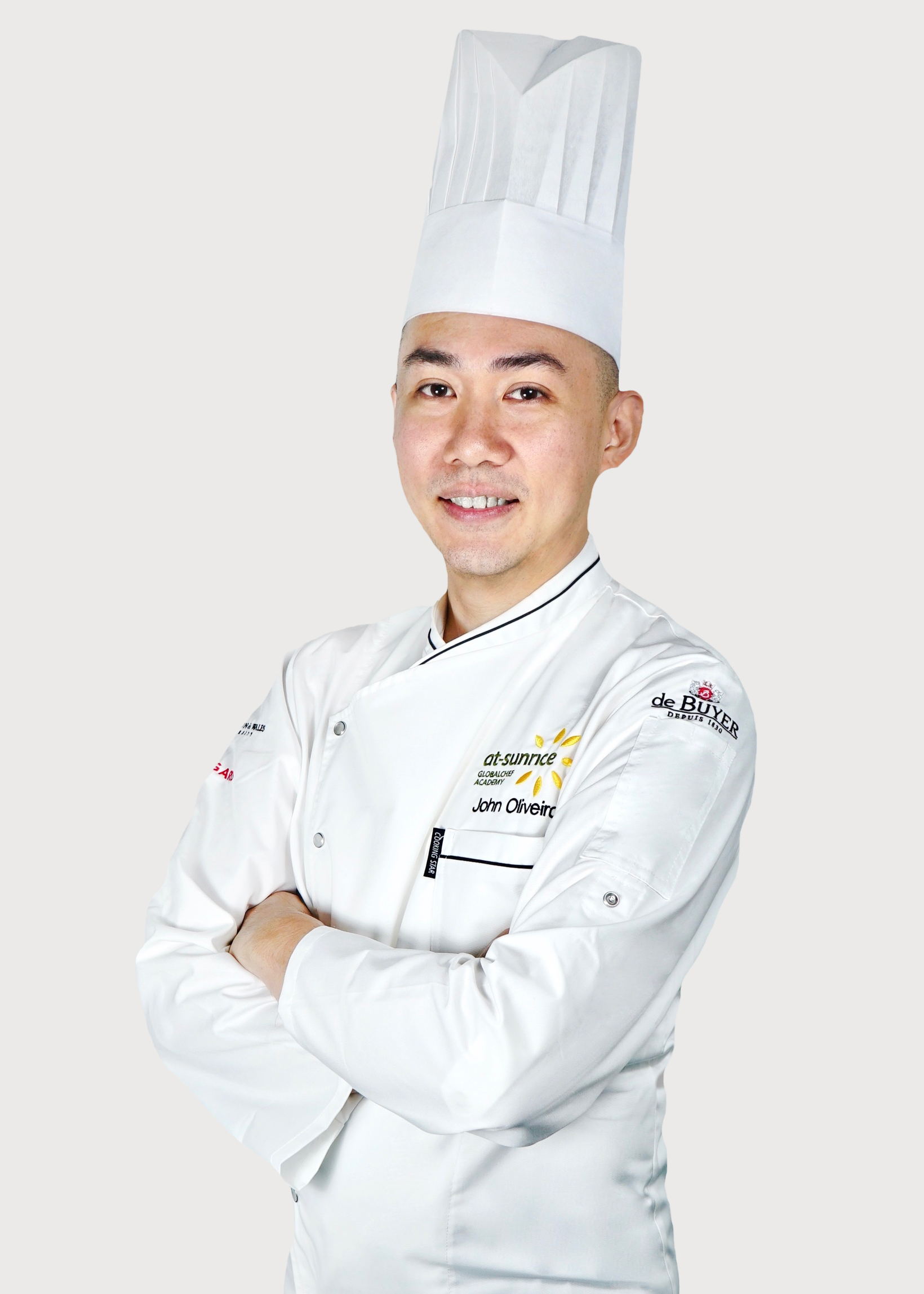 Chef John Oliveiro was in media industry before deciding to join the At-Sunrice in the Diploma in Culinary Arts in 2009. He has since expanded his knowledge, skills and abilities from working in various hotels and restaurants serving different cuisines, including Japanese and French. He was the Sous Chef in the luxury W Hotel, and a Junior Sous Chef in the five-star resort, Capella Hotel. He is not only is experienced in cooking, but also in kitchen management and operations. While working in Capella Hotel, he was selected to be sent to Nanjing, China to assist in the setup, training of the staff and running the then newly opened Solis Hotel. He assists daily operations, maintains inventory, and even engineers and execute new menus in the hotels. 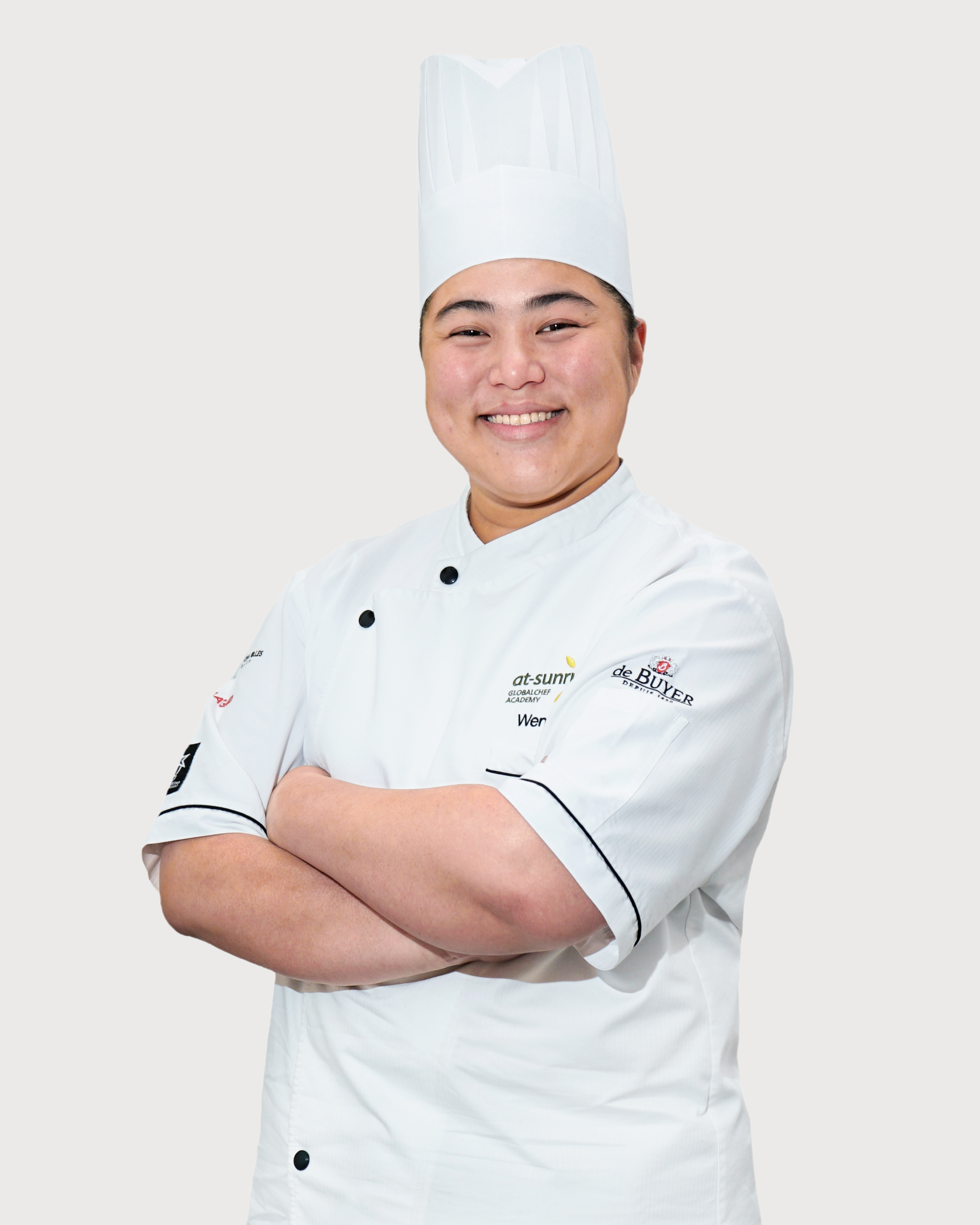 Chef Wendy Ng specialises in Western cuisine and brings with her over 10 years of experience from the culinary industry. Having headed a British restaurant for two years, she has taken an interest in British cuisine ever since. She graduated with a Diploma in Culinary Studies from SHATEC in 2008.

After receiving her diploma, Chef Wendy worked as a Chef de Partie at the Line in Shangri-La Hotel, Singapore, the restaurant awarded Buffet of the Year in 2006.

In her free time, Chef Wendy enjoys photography and café hopping in search of a great cup of coffee. Her dream is to travel the world in the future.

Chef Wendy is keen to pass down the knowledge and skills she has gained to the next generation of aspiring chefs in At-Sunrice GlobalChef Academy. She hopes to inspire and motivate them about the trade, in the same way that she was inspired by all her mentors from previous organisations. 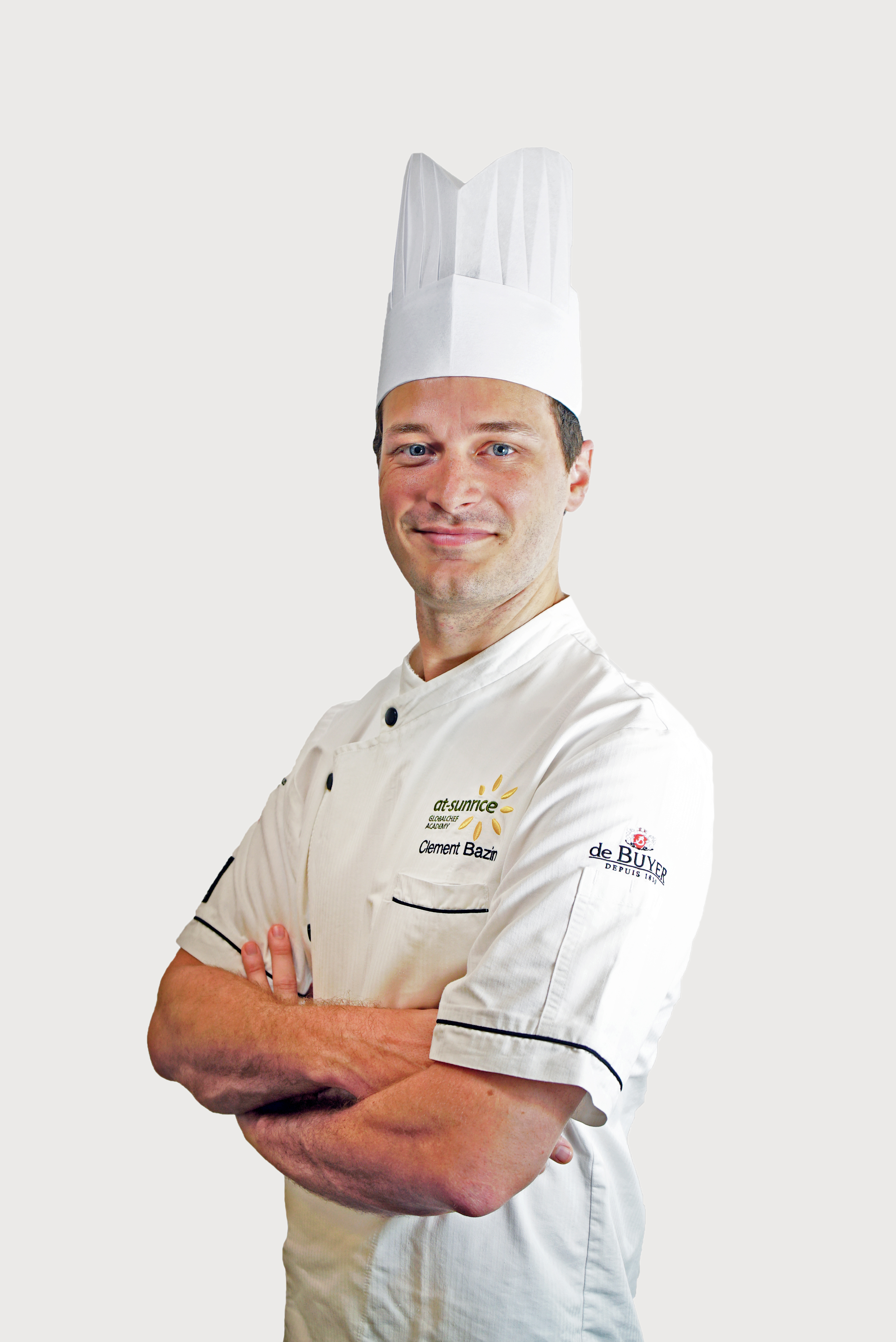 Chef Clement Bazin is a specialist in pastry and bakery, learning and gathering key experiences by working in many establishments around the world such as Ladurée Paris. His culinary journey that started back in 2001, has brought him from his hometown in France, to Sydney and Brisbane, Australia and finally to Singapore.

He has held important positions in various pastry kitchens, working under many well-known chefs, such as Chef Pierre Hermé, Chef Éric Kayser and Chef Adriano Zumbo. He was the pastry sous chef of the 3 Michelin Stars Joël Robuchon and the 2 Michelin Stars Atelier Joël Robuchon Restaurants at Resorts World Sentosa for 3.5 years, before joining At-Sunrice as the Co-Lead for Pastry & Bakery in 2018. 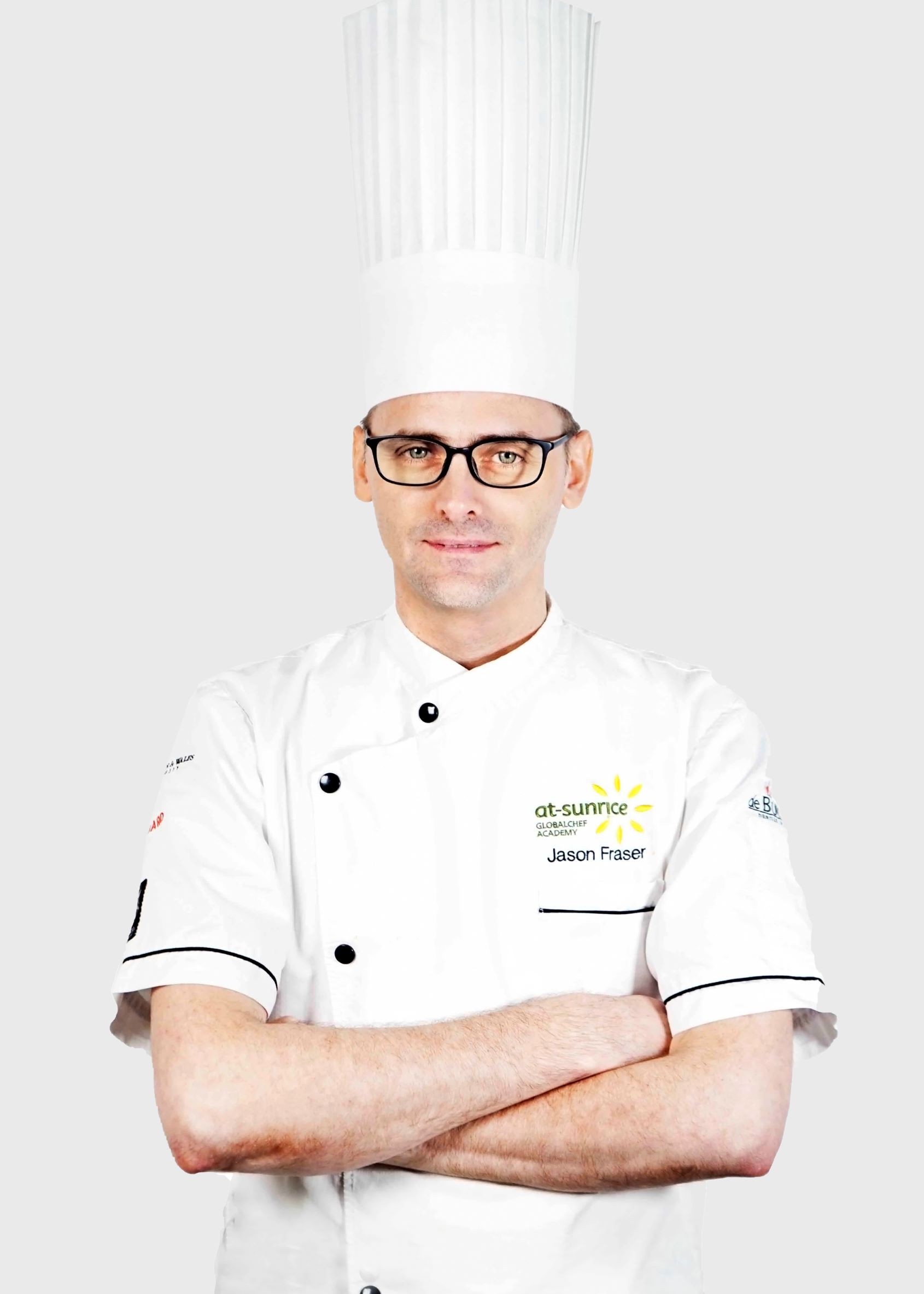 True expertise in desserts is all in the details.  Chef Jason’s exceptional culinary skills are proof of this. From Australia, Chef Jason studied baking in the early 1990’s, and was quickly picked up by one of the biggest bakeries in country.

Always striving for excellence, Chef Jason claimed a position in Tahiti as Assistant Pastry Chef at M/S Paul Gauguin before being offered a role at as Pastry Chef at The Western hotel in Macau.

His keen love of the industry led him to an Executive role with the opening team of the The Venetian in Macau, which was the world’s largest Casino at that time. 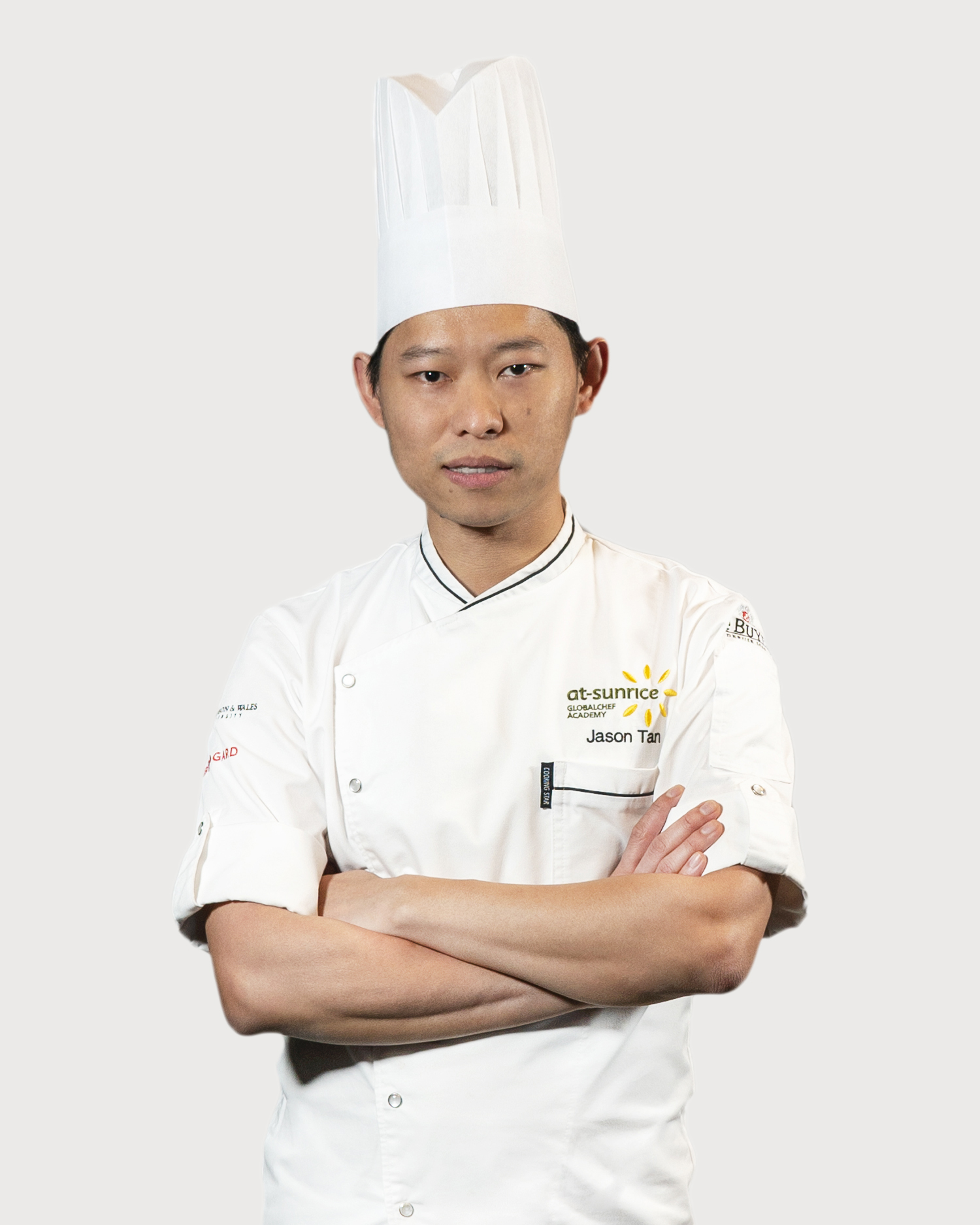 With nine years of pastry and baking experience, Chef Jason Tan’s beautiful cake creations are featured in HerWorld Brides publications locally. Born in Malaysia, Chef Jason moved to New Zealand to complete a Diploma in Business from Kapiti College in Wellington. Upon graduation, he started his own café there with a Maorian friend. It was there where his love and passion for making good food was truly ignited.

In 2007, Chef Jason returned to Malaysia to get his bachelor’s degree in Hospitality and Tourism Management from Taylor’s University. He then interned at Jones the Grocer, Singapore and continued as a bar supervisor where he honed his latte art as a barista.

Four years later, Chef Jason began his new adventure at Dessert Cup, one of Singapore’s famed customised cake shops. During his eight years there, he progressed from the level of commis to leading a team of cake decorators. His fondant and buttercream cake decorating skills were entirely self-taught. Now a chef instructor in At-Sunrice GlobalChef Academy, Chef Jason Tan wishes to pass on his pastry and baking skills to his students.

Chef Jason will participate in FHA HoReCa Culinary Challenge under the Cake Decoration category in July 2020. 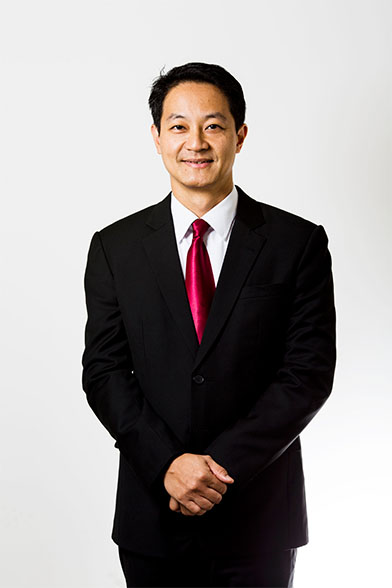 Mr Alan Tan, who recently earned his Bachelor of Hospitality Management from University of West London, had more than 10 years of food and beverage management experience in a number of restaurants, hotels and country clubs in Singapore. He is a Certified Specialist in Spirits and Wines with the Society of Wine Educators and a Restaurant Association of Singapore Gold Award winner in 2010 for Overall Achievement in Excellent Service. He received his Higher Diploma in Hotel Management from SHATEC in 1994 and went on to obtain an Advanced Certificate in Training & Assessment from Sigma Solutions HRD Consultants and a Diploma in Adult & Continuing Education from the Institute for Adult Learning. He was Senior Manager in Training & Curriculum Development at Singapore Culinary Institute for three years before joining At-Sunrice in 2010 where he now instructs students on various aspects of food and beverage operations. 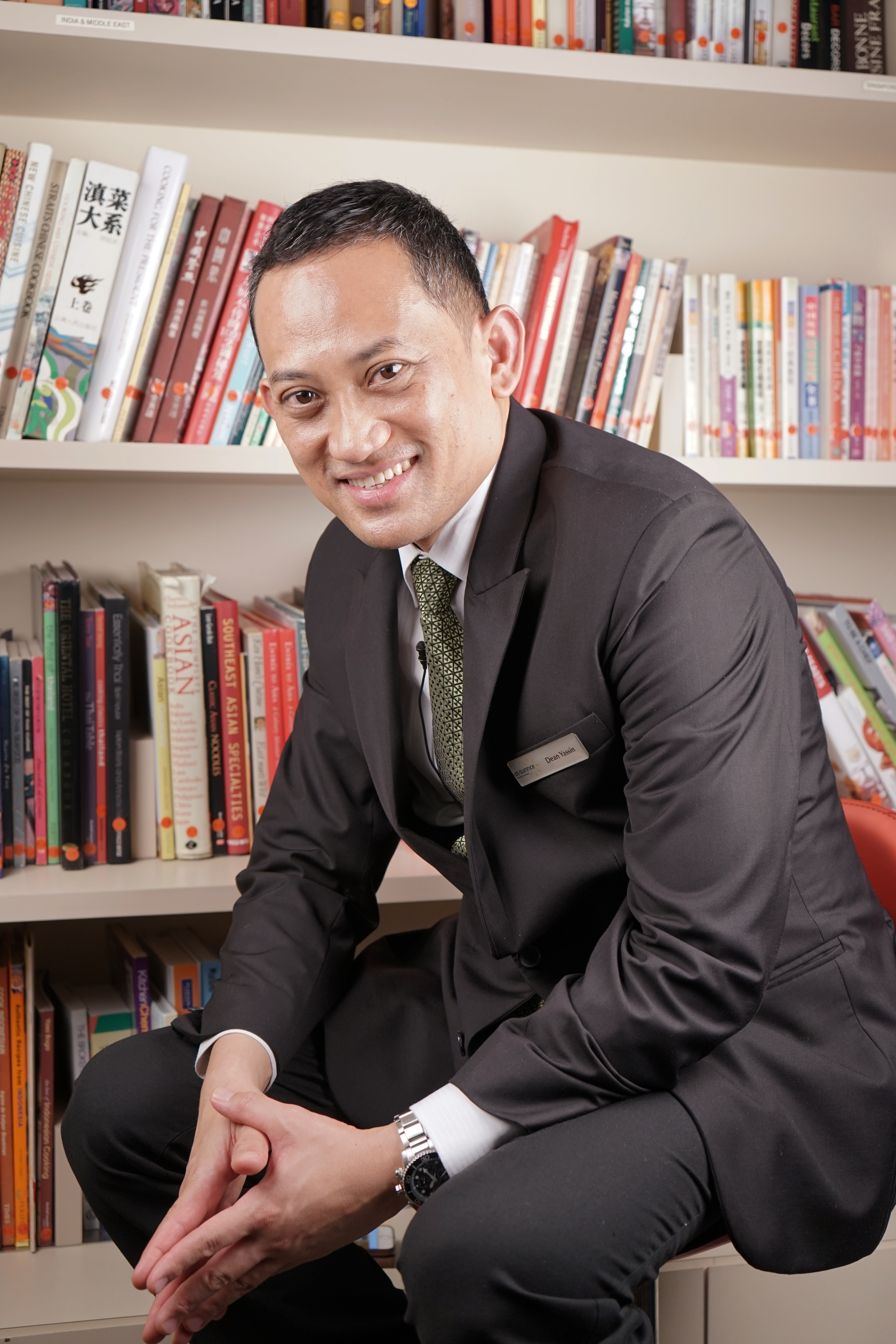 Mr Nordin bin Mohd Yassin Dean joined At-Sunrice in 2006 and has been recognised with the WSQ Best Trainer Award by the Workforce Development Agency in 2012 and the Instructor of the Year in 2011. As Restaurant Manager at The Tanglin Club for more than 10 years, Mr Dean was decorated with the Service Professional Award for Outstanding Conduct & High Level of Service in 1996. He also won the Best Table Display in the Meat & Livestock Australia (MLA) Black Box Culinary Challenge in 2007 and clinched the Silver Award in the Table Setting in Food & Hotel Asia in 2004.
He earned his NTC2 in Food and Beverage Skills in 1991 and his Certificate in Food and Beverage Management in 2000 from the Singapore Hotel Association Training Education Centre (SHATEC) and a Bachelor of General Studies from SIM University. Mr Dean also passed the Wine and Spirit Education Trust of Great Britain Certificate Examination and is a certified coffee sommelier with Nestle Nespresso. He holds the Advanced Certificate in Training and Assessment from the Singapore Training and Development Agency and the Industry Trainer Certificate from ITE Singapore.